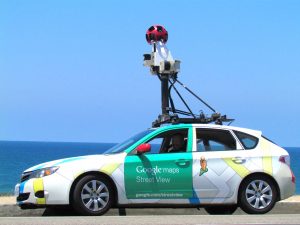 Google Maps was launched in 2005, Google Street View in 2007. Images captured by both sometimes demonstrate constructive knowledge by showing that a dangerous condition existed for a period of time sufficient to impute notice against the owner or possessor of the property. The trick for the proponent of the Google images is to get them admitted into evidence.

Absent agreement of the opposite party, photographs must be authenticated in order to be admitted into evidence. Other than self-authentication under s. 90.902, Fla. Stat., there are two ways to authenticate photographic evidence. Dolan v. State, 743 So. 2d 544, 545 (Fla. 4th DCA 1999). Method number one requires a person with personal knowledge to testify that the image fairly and accurately depicts a scene. Id. In the case of Google images taken before an accident, this would require the testimony of a person with personal knowledge of the pictured condition before the accident. This is often easier said than done. Employees of a business establishment, for example, who were around when the pre-accident Google images were taken may be reticent to give the necessary foundation testimony or may simply not recall. The second method is known as the “silent witness,” under which the photograph “may be admitted upon proof of the reliability of the process which produced the tape or photo.” Id. at 545-46 (citing Hannewacker v. City of Jacksonville Beach, 419 So. 2d 308 (Fla. 1982)). In the case of Google images, the “silent witness” must be someone with control over or personal knowledge of the Google images system. As outlined in City of Miami v. Kho, (Fla. 3rd DCA October 16, 2019), a case involving an effort by the plaintiff to introduce a Google Maps photograph from an earlier time, to show that the city was on constructive notice of the dangerous condition, the “silent witness” method contains five elements:

(1) evidence establishing the time and date of the photographic evidence;

(2) any evidence of editing or tampering;

(4) the procedure employed as it relates to the preparation, testing, operation, and security of the equipment used to produce the photographic product, including the security of the product itself; and

(5) testimony identifying the relevant participants depicted in the photographic evidence.

(NOTE: In the City of Miami v. Kho case, both the trial court and the appellate court refused to find that the Google Maps photograph was self-authenticating under s. 90.902, Fla. Stat.)