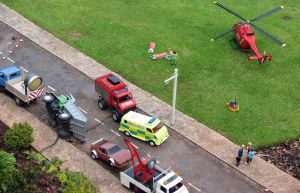 With fault being a fundamental element in all but strict liability personal injury cases, it is often critically important for both sides of a dispute to be able to view certain photographs taken after an accident to help piece together the how and why of its occurrence. Common examples include accident-scene images showing the resting place of vehicles involved in a multi-vehicle collision or a condition alleged to have caused a fall.

Very often only one side has the photographs and sometimes the party refuses to share them with the other side, citing work product privilege as the basis.

Florida Rule of Civil Procedure 1.280(b)(4) provides that a party may discover work product upon a showing of need and an inability to obtain the substantial equivalent without undue hardship. In Wackenhut Corp. v. Crant-Heisz Enters., 451 So.2d 900 (Fla. 2d DCA 1984), a property damage case involving a dispute over where, within a complex of buildings, a fire had started, only one of the two parties had photographs of a key warehouse area. Citing work product, the party with the photographs refused to produce them. On a petition for writ of certiorari, Florida’s Second DCA ordered production of the photographs, reasoning as follows:

Since the warehouse has been replaced, the scene cannot be reproduced. [Citing Dodson v. Persell, 390 So.2d 704 (Fla. 1980).] We find that Wackenhut has demonstrated exceptional circumstances regarding the photographs and authorize their discovery.

Because Kmart has satisfied the requirements of rule 1.280(b)(3) by demonstrating that the photographs in the plaintiff’s possession are relevant and material (they allegedly depict the condition of the floor at the time the plaintiff slipped and fell); there is no other means of obtaining the discovery requested (no other photographs were taken of the scene ten years ago when the incident allegedly occurred); and the photographs are the best evidence of the condition of the floor at the time of the alleged slip and fall, the trial court departed from the essential requirements of the law in denying Kmart’s request for production. Because there is no substitute for the information Kmart seeks and no way on plenary appellate review of evaluating how the information may have affected the case, Kmart has demonstrated irreparable harm and the petition should be granted. See Criswell, 636 So.2d at 563; Ruiz v. Steiner, 599 So.2d 196 (Fla. 3d DCA 1992); Carroll, 528 So.2d at 954; Colonial Penn, 380 So.2d at 1306.

IMPORTANT NOTE: Judges will require more than unverified claims that the seeking party is unable to obtain the substantial equivalent of the work product material without undue hardship. At the very least the attorney for the moving party should file a verified motion in which the claim is asserted. In addition, at the hearing on the motion the lawyer should ask the judge to swear him or her in so as to add greater import to the allegations of need and hardship. Finally, affidavits of people in the know can be used to establish the moving party’s position.

The work product privilege sits on highly fortified ground. One must be well-armed when seeking to breach its walls.