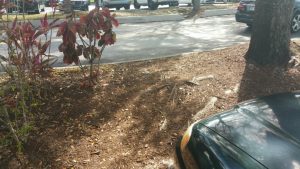 Everyone has crossed through some sort of landscaped area to get from one public place to another. While few fall and hurt themselves, some are less fortunate. Florida courts have addressed the issue of fault for such accidents. Should the landowner be held accountable? Or is the standard, cross at your own peril?

The answer is, it depends.

One of the leading cases on the subject is Wolf v. Sam’s East, Inc., 132 So.3d 305 (Fla. 4th DCA 2014). While the court ruled for the property owner, its discussion shows how the outcome can go the other way under different circumstances.

“Generally, a property owner owes two duties to an invitee: (1) the duty to use reasonable care in maintaining the property in a reasonably safe condition; and (2) the duty to warn of latent or concealed dangers which are or should be known to the owner and which are unknown to the invitee and cannot be discovered through the exercise of due care.” Aaron v. Palatka Mall, L.L.C., 908 So.2d 574, 577 (Fla. 5th DCA 2005).

These basic reference points are qualified by other legal concepts. One of the main qualifiers is the open and obvious doctrine: “some conditions are so obvious and not inherently dangerous that they can be said, as a matter of law, not to constitute a dangerous condition, and will not give rise to liability due to the failure to maintain the premises in a reasonably safe condition.” Dampier v. Morgan Tire & Auto, LLC, 82 So. 3d 204, 206 (Fla 5th DCA 2012).

However, there is a qualifier to the doctrine: “The obvious danger doctrine provides that an owner or possessor of land is not liable for injuries to an invitee caused by a dangerous condition on the premises when the danger is known or obvious to the injured party, unless the owner or possessor should anticipate the harm despite the fact that the dangerous condition is open and obvious.” Aaron v. Palatka Mall, L.L.C., 908 So.2d 574, 576-77 (Fla. 5th DCA 2005) (citation omitted); see also Spatz v. Embassy Home Care, Inc., 9 So.3d 697, 698-99 (Fla. 4th DCA 2009).)

In the Wolf case, the Plaintiff tripped on a tree root and fell while traversing an area landscaped with dirt, trees, and mulch. The court noted that the “landscaping areas were a few feet wide … and had concrete walkways that allowed persons to cross from one side of the landscaping area to the other without the need to step into the landscaping area itself.” The concrete walkways were located throughout the landscaping areas, and Wolf knew there was one just a few feet from where he had parked and decided to cross. The Wolf court ruled, as a matter of law, that the tree roots were so obvious and not inherently dangerous as to constitute a non-dangerous condition. It cited the following proposition:

Landscaping features are generally found not to constitute a dangerous condition as a matter of law…. [A] landowner has no liability for falls which occur when invitees walk on surfaces not designed for walking, such as planting beds.

However, by emphasizing “that Wolf could have easily and safely crossed the landscaping area using a concrete walkway located only a few feet away from where he fell” — Wolf testified in his deposition that he knew the walkway existed but chose not to use it — the court signaled an exception to the Dampier rule. This opening means that juries should typically be allowed to consider the circumstances in deciding fault.

Our firm has a pending case where landscaping bordering a parking lot stretched 125 yards without a single concrete crossing path for pedestrians. Our client, who parked nearly equidistance from either end, tripped and fell at night on a tree root while crossing through a section well-worn by years of pedestrian traffic. She happened to park next to the path, which also provided the most direct route to her destination. She sustained serious injuries. We will argue that due to the lack of any dedicated crossing paths in the vicinity of the accident, our case is distinguishable from the Wolf case.