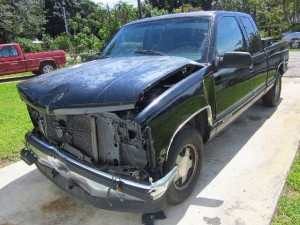 Regarding recovery based on fault, present-day Florida tort law is governed by the standard established by the Florida Supreme Court in Hoffman v. Jones, 280 So.2d 431 (Fla., 1973). Hoffman replaced Florida’s contributory negligence rule (West v. Caterpillar Tractor Co., Inc., 336 So.2d 80, 90 (Fla.1976): the “gist of the doctrine of contributory negligence is that the person injured should not recover when it appears that the injury would have been avoided if the injured person had exercised reasonable care”) with a system of tort recovery based on a “pure form” of comparative negligence:

Following the opinion in Hoffman, the Florida Legislature in 1986 codified the Court’s adoption of a system of comparative negligence, and its concomitant abolishment of the rule of contributory negligence, by enacting section 768.81 Florida Statutes (2015 version).

According to the National Safety Council, over 2.5 million rear end collisions are reported every year in the United States, making them the most common type of automobile accident. Florida, of course, contributes to this statistic in large numbers.

Since most rear-end collisions are due entirely to the negligence of the rear driver, under Florida decisional law there is a rebuttable presumption of fault  that attaches to the rear driver in a rear-end motor vehicle collision case. See generally Eppler v. Tarmac America, Inc., 752 So.2d 592, 594 (Fla. 2000) (explaining origins of rear-end presumption). Unless the rear driver presents evidence of probative value to overcome the presumption, the beneficiary of the presumption is entitled to judgment as a matter of law. Birge v. Charron, 107 So.3d 350 (Fla. 2012) and Bodiford v. Rollins, So. 3d , 40 FLW D1844 (Fla. 5th DCA 8-7-2015) (as there was no evidence showing that plaintiff Rollins breached any legal duty or failed to use reasonable care, the trial court’s denial of plaintiff Rollins’ motion for judgment notwithstanding the verdict was reversed.). In other words, the rear-end presumption is a vanishing presumption “constructed by the law to give particular effect to a certain group of facts in the absence of further evidence.” Gulle v. Boggs, 174 So.2d 26, 28 (Fla.1965) and Clampitt v. D.J. Spencer Sales, 786 So.2d 570, 572-73 (Fla.2001) (same).

In Birge, the trial court entered summary judgment for the defendant, the driver of the vehicle in front, on the basis that plaintiff Charron, the passenger on a motorcycle that flipped over when the driver unsuccessfully attempted to avoid a collision with the rear of the defendant’s vehicle could not rebut the presumption of negligence that attached to the driver of the motorcycle as the rear driver. In essence, the court disallowed the presentation to a jury of divergent eyewitness accounts of the events leading up to the crash relating to the reasonableness and care with which the defendant  operated his automobile immediately preceding the accident.

On appeal, the Fifth District Court of Appeal reversed the trial judge, deciding that the facts regarding the reasonableness and care with which the defendant operated his vehicle presented a jury question regarding the proximate causes of the collision. Because of a certified conflict with the Fourth District’s decision in Cevallos v. Rideout, 18 So.3d 661 (Fla. 4th DCA 2009), the case was reviewed by the Florida Supreme Court. The Supreme Court approved of the result reached by the Fifth District (although it disagreed with its alternative conclusion that the rear-end presumption is not applicable or available as an evidentiary tool in rear-end collision cases where the plaintiff is not a rear driver). The court held as follows:

“under Florida law, negligence claims, including those arising from rear-end motor vehicle collisions, are governed by the principles of comparative fault prescribed by statute and this Court’s decision in Hoffman. We further hold that the rear-end presumption is an evidentiary tool to facilitate a particular type of negligence case where there is an absence of a jury question on the issue of comparative fault; it is not an alternate means of tort recovery in derogation of Florida’s well-established system of recovery based on comparative negligence. Accordingly, because rear-end collision cases are substantively governed by the principles of comparative fault, we hold that where evidence is produced from which a jury could conclude that the front driver in a rear-end collision was negligent and comparatively at fault in bringing about the collision, the presumption is rebutted and the issues of disputed fact regarding negligence and causation should be submitted to the jury.”

We never take for granted that our rear-ended clients will be considered fault-free, nor do we dismiss without thoughtful consideration the idea of negligent conduct by the lead driver as the cause of injuries sustained by prospective clients. We have been successful both in fending off allegations of lead vehicle fault and in achieving positive results for some trailing vehicle accident victims. While the rear-vehicle presumption can be a difficult burden to overcome, it is not impossible.