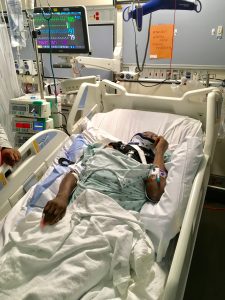 We are representing a gentleman who was struck by a pickup truck just before sunrise while walking to a bus stop on his way to work. The driver turned quickly without warning from a main road onto a small side street while our client was halfway across after looking both ways before proceeding. Our client spent two weeks in the hospital in intensive care. The driver of the vehicle was charged with failing to yield the right of way.

We learned that the vehicle was purchased by an administratively dissolved corporation and loaned by the sole officer and shareholder of that defunct corporation to the driver for personal use. While the dissolved corporation did not maintain personal injury liability insurance, our investigation determined that the officer/sole shareholder (O/SS) owned unencumbered real estate worth in excess of $1,000,000, almost enough to cover our client’s medical expenses, lost income, and personal injuries. (We made this asset determination by searching the public records and by obtaining an asset affidavit from the O/SS. The driver of the vehicle is uninsured and does not have assets of any meaningful value.)

Through experience and legal research, we have concluded, based on two intertwining legal theories, that the O/SS is likely personally liable for our client’s significant damages.

Liability for preincorporation transactions.—All persons purporting to act as or on behalf of a corporation, knowing that there was no incorporation under this chapter, are jointly and severally liable for all liabilities created while so acting.

For us to be able to impose personal liability on the O/SS under this statute, we must show that he knew or should have known that the corporation was dissolved when he acted. Presley v. Ponce Plaza Associates, 723 So. 2d 328 (Fla. 3rd DCA 1998) and Harry Rich Corp. v. Feinberg, 518 So.2d 377 (Fla. 3d DCA 1987). Given that the gentleman was the sole officer and shareholder of the corporation, which had been administratively dissolved years before the vehicle was purchased, we feel confident in being able to make that proof.

The dangerous instrumentality doctrine, which applies in Florida, provides that the owner of a motor vehicle, considered a dangerous instrument, is vicariously liable to individuals harmed by the operation of the vehicle by permissive users. See Roth v. Old Republic Ins. Co., 269 So.2d 3 (Fla.1972); Susco Car Rental Sys. of Florida v. Leonard, 112 So.2d 832 (Fla.1959); Anderson v. Southern Cotton Oil Co., 73 Fla. 432, 74 So. 975 (1917). By knowingly acting for the dissolved corporation, the O/SS either owned the vehicle or is liable under 607.0204 for the dissolved corporation’s liability as the owner, or both.

Our second theory, which may be easier to prove than the first, is based on bailor liabilitly. The controlling concept for our theory is the dangerous instrumentality doctrine. In McDowell v. Rodriguez, 822 So. 2d 14 (Fla. 5th DCA 2002), McDowell, who loaned a vehicle which was in her possession through the consent of the owner, was found liable for more than $1 million in personal injury losses caused by the negligent operation of that vehicle by a person to whom she entrusted the vehicle. In finding against McDowell, the court cited to the opinion given by Judge Altenbernd in Budget Rent-A-Car Systems, Inc. v. State Farm Mutual Automobile Insurance Co., 727 So.2d 287 (Fla. 2d DCA 1999):

When there is a chain of custody of the automobile, as a dangerous instrumentality, indemnity flows between the vicariously liable tortfeasors so that ultimate vicarious liability rests with the tortfeasor who entrusted the negligent driver with the vehicle.

In Budget, Beverly Tolbert rented a car from Budget in Tampa, Florida, for a one-day period. During this one-day rental, the vehicle was driven by her boyfriend Mark Grant without Ms. Tolbert. Mr. Grant was involved in an accident and injured Althea Montgomery. Ms. Montgomery made a claim against Budget, Ms. Tolbert, and Mr. Grant.

At the time of the accident, Ms. Tolbert had insurance on her family automobile with State Farm. Mr. Grant had no automobile liability insurance. State Farm refused to extend coverage to Ms. Tolbert, Mr. Grant, or Budget for this accident. Budget settled the claim with Ms. Montgomery for $62,500 and obtained a release for all three potential tortfeasors. It then sought to recover this money from State Farm based on McDowell’s liability under the dangerous instrumentality doctrine as the bailor who entrusted the negligent driver with the vehicle. While the fight in Budget was over insurance policy language, Budget was ultimately allowed to proceed against State Farm to recoup its settlement payment.

For our purposes, the takeway from the Budget and McDowell cases is that “ultimate vicarious liability rests with” the officer/sole shareholder (O/SS).

It isn’t very often that an inadequately insured tortfeasor has sufficient assets to cover a serious loss. In our case, we were pleasantly surprised by the outcome of our asset investigation.