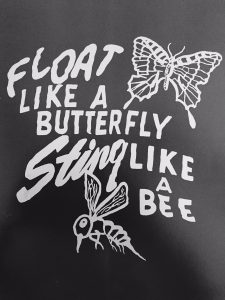 I remember the night, in 1964, that a young Cassius Clay defeated world champion Sonny Liston at the Miami Beach Convention Center. I waited anxiously by the radio for a report of the outcome. He was expected to be eaten alive by the big bad bear Liston and become a footnote in the history books. I was more relieved that he wasn’t hurt than excited about the victory. The next day Cassius Clay became Muhammad Ali, and the rest is much, much more than a footnote in the history books.

While his ring exploits are legendary — Olympic Gold Medal, the Thrilla in Manila, dismantling George Foreman in 8 rounds in Zaire, Africa in the fight known as The Rumble in the Jungle — his greatness came from the character he demonstrated both in the ring and out. In refusing to participate in an unconscionable conflict — the United States never formally declared war in the so-called Vietnam War — in defiance of White Establishment America, he was stripped of his world title, barred from fighting for three and a half years during the prime of his physical prowess, and convicted of draft evasion and sentenced to five years in prison. Instead of complaining, he fought the conviction all the way to the United States Supreme Court and had it reversed by an 8-0 vote.

In his first big fight after the ban was lifted, a rusty MA took a legendary left hook to the jaw from the great Joe Frazier, then the heavyweight world champion, that sent him to the canvas. While this shot would have knocked out most heavyweights, MA got up and fought to the end. Joe Frazier won by decision. For the record, MA beat Smokin’ Joe in a rematch and then again in the greatest prize fight of all time, The Thrilla in Manila. Both fighters went toe to toe for 14 rounds until Joe Fraziers’ Hall of Fame trainer, Eddie Futch, refused to allow his fighter out for the 15th round. (Historical note: because of ring deaths and damage caused by late round cumulative punishment, title fights today are limited to 12 rounds.) Ali remarked that the fight was the closest thing to dying he knew of.

As he was such a big part of my life and I loved him so much, I could go on and on about “Ali, Ali, Ali.” If I had to choose one word to describe him, it would be: COURAGEOUS.