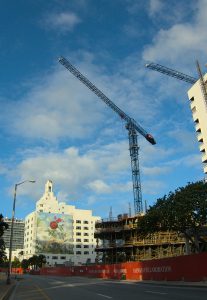 The legal principle of respondent superior makes employers liable in civil damages for the negligence of their employees.

The typical large-scale construction project is manned by workers employed by many different companies. However, the theories of vertical and horizontal immunity contained in Florida Statute Sections 440.10(1)(b)&(e) exempt construction site employers from respondent superior liability for worker on worker accidents.*

In many cases, an injured worker can get closer to being made whole through civil rather than workers’ compensation remedies. However, because of sections 440.10(1)(b)&(e), most construction site contractors and subcontractors are immune from civil liability. See section 440.11 Florida Statutes. The exceptions to this rule are when the employee has been grossly negligent or there has been a failure to secure workers’ compensation as required by Chapter 440.

Horizontal immunity (440.10(1)(e)) was adopted in 2003 as part of Jeb Bush’s effort to shield employers and workers’ compensation insurance companies from responsibility. It eliminates the direct, vertical link requirement between company and worker, effectively extending immunity to every construction site employer. In Amorin v. Gordon, 996 So. 2d 913 (Fla. 4th DCA 2008), the statute survived a constitutional challenge.

Negligence laws serve two purposes: make a damaged person whole and deter negligent behavior. While the workers’ compensation system does provide benefits, its immunity provisions limit the most serious consequences of negligent conduct. This should be discouraged as bad public policy.

The justification for limiting liability or granting immunity is the substitution of something else in its place, a quid pro quo. The duty to provide workers’ compensation benefits supplants tort liability to those injured on the job. If the duty to provide such coverage does not exist, then one has no reason to expect immunity from wrongdoings committed against a third party…. [W]e recede from Younger …, thus allowing a third-party action against one who has no duty to afford compensation benefits.

While the subject matter of the Abernathy case was vertical immunity, the reasoning applies even more so with regard to horizontal immunity. By amending the law in 2003, Florida Republican legislators chose to ignore the Supreme Court’s sound reasoning. Such is the state of Republican politics in Florida — individuals losing rights without receiving anything in return. This is contrary to the letter and spirit of the workers’ compensation system, created in Florida in 1935 on the principle of fair mutual reciprocity between employer and employee.