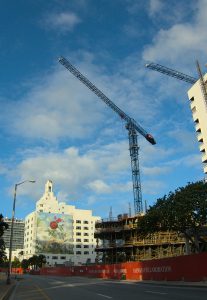 Not surprisingly, there is an exception to this rule. The exception involves accidents that happen on public and private construction projects. The exception, found in section 440.10(1)(e), Florida Statutes, provides as follows:

Our office was recently contacted by the superintendent of a single family home construction project. He wanted to know if we might be able to bring a civil action for personal injuries against a negligent construction site subcontractor. (While our law firm handles workers’ compensation cases, he had already settled his workers’ compensation case with another lawyer.) His employer, the general contractor, had hired an excavation company to locate underground sewer lines so that a connection could be made for the new house waste line. When, at the request of one of the subcontractor’s employees, he walked over to look at something, the ground below him collapsed, causing him to fall nearly six feet into the deep end of an unfinished swimming pool shell. He sustained severe injuries. The subcontractor created the dangerous condition.

Believe it or not, there are two exceptions to the 440.10 immunity afforded construction site subcontractors. Interestingly, the exceptions are sub-parts to the section, 440.10(1)(e), which creates the immunity. For a subcontractor workers’ compensation immunity to apply,

See Moradiellos v. Gerelco Traffic Controls, 176 So. 3d 329 (2015)(Plaintiff alleged gross negligence against a subcontractor. While summary judgment was ultimately entered against the Plaintiff, it was because the facts did not rise to the level of gross negligence, rather than any deficiency in the legal theory).

Since subpart 1. does not apply to the case we are considering, we are left with deciding whether the subcontractor’s conduct amounted to gross negligence.

Therefore, gross negligence requires: “(1) circumstances constituting an imminent or clear and present danger amounting to a more than normal or usual peril, (2) knowledge or awareness of the imminent danger on the part of the tortfeasor, and (3) an act or omission that evinces a conscious disregard of the consequences.” Vallejos v. Lan Cargo S.A., 116 So.3d 545, 552 (Fla. 3d DCA 2013).

This is an exceedingly high hurdle to overcome. Making matters worse is the long list of appellate cases standing guard over what has long been the sacred ground of workers’ compensation immunity.

That said, we may yet move forward with the case described above.