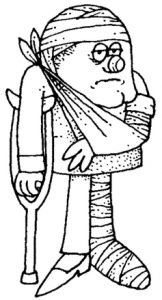 It is not uncommon for injured workers to be terminated from their jobs post-accident. There was a time when Florida law required employers to make every effort within reason to reemploy their injured workers. While that admirable public policy was scrapped some 15 years ago, section 440.205, Florida Statutes does prohibit employers from terminating employees hurt on the job for claiming workers’ compensation benefits. However, as a firm that handles wrongful termination cases, we know that proving one from the other can be difficult. Compounding the difficulty is the element of good-cause firings, i.e., justified firings based on conduct, such as excessive absences.

Per section 440.15(4) Florida Statutes (2018), temporary partial disability (TPD) wage loss benefits are due “if the medical conditions resulting from the accident create restrictions on the injured employee’s ability to return to work … or an employee returns to work with the restrictions resulting from the accident and is earning wages less than 80 percent of the preinjury average weekly wage.” This language has allowed some employees terminated for cause to be entitled to TPD benefits. (Caveat: Not all good-cause terminations are treated alike. Read this blog: Jeffrey P. Gale, P.A. // Florida Workers’ Compensation 440.15(4)(e) Termination for Misconduct Law Not Well Understood.)

One of the leading cases on the subject is Stewart v. CRS Rinker Materials Corp., 855 So.2d 1173 (Fla. 1st DCA 2003). The Claimant injured his back on the job in a compensable accident — meaning, an accident accepted by the Employer/Carrier. He returned to work for the Employer, in a modified-duty status to conform to the authorized doctor’s recommendations, for approximately three weeks after the accident until the Employer terminated him  for excessive absenteeism (most of which occurred before the accident). For nine of the next eleven months he looked for work but remained unemployed. He also continued under the care of workers’ compensation doctors, who imposed work restrictions.

A claim for TPD benefits was filed for the nine months of lost wages. The Judge of Compensation Claims (JCC) ruled against him for the entire nine months. Her reasoning for some of those months was that because the Claimant was fired for cause from a job he proved he could perform, he could not meet his burden to show that his loss of earnings for the period was caused by an incapacity because of the work injury. (For the other months, the benefits were denied on other legal grounds based on a different set of facts. That legal principle will be addressed in another blog. The subject blog will focus on the good-cause termination issue.) Each denial was reversed on appeal by the First District Court of Appeal.

In reversing the lower court, the DCA considered these elements consequential:

The court determined that these elements satisfied the Claimant’s burden of showing a causal connection between his injury and loss of earning capacity after his termination. As for the termination aspect, the court cited precedent:

“Even though a claimant may be terminated from his or her employment for insubordination, the claimant may still be entitled to benefits if he or she satisfies the burden of demonstrating that the injury contributed to the wage loss after the termination.” Jefferson v. Wayne Dalton Corp., 793 So.2d 1081, 1084 (Fla. 1st DCA 2001) (citing Betancourt, 693 So.2d at 684) (emphasis added).

Injured workers are well-advised to seek the advice of counsel at their earliest convenience. Since most workers’ compensation attorneys handle these cases on a contingency fee basis, which means that up-front fees will not be required and fees are only paid when there is a successful recovery, there is little reason to wait. Delays in receiving proper legal guidance may result in the reduction of necessary benefits.